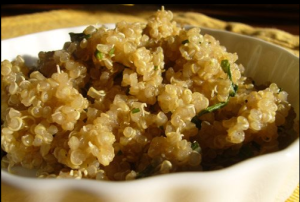 Quinoa – have you tried it?

Pronounced ‘keen-wa’ this super seed from South America is low on the GI and because it boasts 9 grams of protein per cup, will keep you feeling fuller for longer. Quinoa is also a valuable source of soluble and insoluble fibre (so it helps to clean you out) and is a good source of zinc, B6, folate and magnesium.

Use quinoa in place of cous cous, pasta or rice with sauces, curries or stir fries and in salads like tabbouleh. It can also be boiled up in half milk half water to create a porridge which tastes great topped with yoghurt and bananas or with crushed nuts and sultanas stirred in in the final 10 minutes of cooking.

Raw it looks nothing like this, its much paler and about a third of its cooked size. You know its ready when the tail separates from the main body of the seed (see above). Quinoa flakes and flour are also available as substitutes to flour and red, black and white varieties are available.

Part One – An Intro to Sleep:

I’m excited to be able to share the knowledge I have about sleep with followers not only of this blog but also #EduTweetOz this week. I often hear of or am directly asked sleep questions so I hope this helps!

Please note medications can also be a cause for significant sleep disruption. If you are worried that there is a medical (as opposed to psychological) reason for any sleep disturbance you experience, its best to see a doctor about it.

In the same way that we prepare young children for bed with a night time routine, its important that we do the same. Today I am discussing how to make sure your bedroom is an optimal space for sleep and also which night time habits you should definitely avoid if night time waking is an issue for you.

*I forgot to mention exercise in this vlog – exercise releases endorphins and energises the body. If you work out too close to bed time you may find you have difficulty getting to sleep. Much better is to exercise in the morning as it naturally tires the body. Also, early morning sunlight acts to kick off our circadian rhythm and helps us to feel tired 12-14 hours late so some early morning sunshine (eat your breakfast outside or even better go for an early morning walk, run or ride) is helpful.

Part Three – Getting Rid of Rumination:

Rumination is the name given to the particularly destructive thought that can come visit at 2am which tend to just go round and round and round in your head. Rumination is not your friend and rumination does more harm than good as it deprives you of the sleep you so essentially need in order to be your best the following day. Watch today’s vlog to learn how to get control of your thoughts and so your sleep.

Part Four – More Strategies for Getting Back to Sleep:

The thought control strategies to get rid of rumination might not work for everyone so today I’m discussing a couple of other ideas that might be helpful, sleep journals and wait for it…actually getting up! I know, bizarre but true. Any ideas why I might be recommending to do that?

Lots of people tell me that they dream about things that are stressing them out and sometimes we find ourselves dreaming about work. Such dreams often come through as anxiety dreams (if not full blown nightmares!) Today I give strategies for bringing the cause of anxiety dreams into our consciousness and also what to do if you know someone who experiences night terrors.

half a bulb (about 8 cloves) garlic

hunk of ginger (at least 2 cms)

*These are approximate measurements. I made this recipe up and cook according to what looks right on the day. Please just use the above as guides but know for me its slightly different every time I make it.

Coarsely chop the onion, carrots and celery. Separate the cloves of garlic but leave the skins on. Chop the ginger into thin slices.

Heat the olive oil and add the chopped vegetables and herbs. Stir until the vegetables are starting to brown and fragrant.

Add the chicken (whole) and brown it (top and bottom) for about five minutes on each side. Make sure the rest of the vegetables don’t stick and burn.

Add the wine and leave it to reduce for a couple of minutes. Add the water (it should be enough to almost cover the chicken).

Bring to the boil and then cover and let simmer for about an hour and a half (or until the chicken falls off the bone when you pick ip up with tongs).

Remove the chicken from the broth and pick the meat off the chicken making sure to remove all skin, bones and guts. You can use this chicken in the soup if you like. It’s also great in sandwiches, pasta, cold rolls, whatever.

Now back to the stock – taste it and see how you like the flavour. Make sure you stir it well first to get all the flavours to the top. Be prepared for it to a little oily (we’ll deal with that later).

If you’re happy with the flavour, it’s pretty much done. Strain it off (remember to put a bowl under the colander – nothing will make you feel worse than dumping the stock down the sink or all over the kitchen).

You can dispose of the cooked veg unless you particularly want to eat them but do make sure you save the garlic. The skins should have kept it pretty much intact. Squeeze the garlic into the broth and mix well to blend through.

If the soup tastes a bit bland, remove the lid and turn up the heat a bit to reduce the stock a little further. Once it’s to your taste, strain the veg off.

Because the skin was on the chicken for this recipe, the broth is likely to be quite oily. I find the best way to remove this is to either place a paper towel over the top of it (on the surface) once it has cooled a little bit (the paper towel will suck up the oil but the broth remains untouched). Alternatively if you plan to use the broth later, just put it in the fridge and as it cools the fat will settle (and harden) on the top of the broth so it will be easy to spoon off.

I usually have this broth just by itself when I’m sick but it also tastes great with pasta (home made ravioli). Alternatively to can you can use it as a base for other soups (such as chicken noodle or chicken and sweetcorn).

Enjoy and hope you get well soon!